The spacecraft Voyager 1 and 2 have entered interstellar space 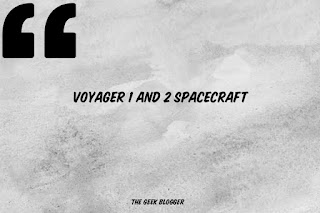 Let's See Which Spacecraft Will Follow Voyager 1 and 2 Into Interstellar Space?

Right now, there are two space crafts who may achieve this: Pioneers 10 and 11 and New Horizons. According to NASA's "Beyond Earth: A Chronicle of Deep Space Exploration" e-book, in late 2017, Pioneer 10 was 118.824 AUs from Earth, which is farther than any spacecraft other than Voyager 1.

However, Pioneer 10, launched in 1972, is headed in the opposite direction from Voyager 1, where the tail of the heliosphere border is much further away, about 220 AUs from the sun. Pioneer 10 currently travels around 2.5 AUs per year and, at this rate, the spacecraft will enter interstellar space around 2057.

It was estimated that Pioneer 11 would reach a maximum distance of up to 98 AUs from Earth, but it is traveling in the same direction as Voyager 1 and 2, which means that the heliosphere border is much closer to it. Pioneer 11 was launched in 1973 & currently traveling at around 2.3 AUs per year and is expected to enter interstellar space in this decade, around 2027.

New Horizons was the most recent spacecraft that was launched in January 2006, it is traveling much faster than Pioneer 10 and 11 with speeds covering up to 3.1 AUs per year. As per NASA calculations, New Horizons may enter the interstellar space in just over 20 years.

The heliosphere is the protective bubble contains different particles and the magnetic fields created by our sun, is the determining factor for entering interstellar space—but even then, it is still considered within our solar system.
Voyager 1 spacecraft begins interstellar space adventure

Voyager 1 and 2 along with other 3 spacecraft, will not soon leave the solar system as this boundary is considered beyond the outer edge of the Oort Cloud. There are still varieties of objects at the edge of our solar system that are still under the influence of the gravity of the sun. It is estimated that Voyager 2 will take around 300 years to reach the inner edge of the Oort Cloud and perhaps 30,000 years to fly.

Here's the good news: The Voyager 1 and 2 spacecraft has entered interstellar space. The bad news: When they finally hit another star system, you're probably gone.

But that shouldn't stop you from marveling at the sheer scientific genius that has been feeding these two probes for over 40 years. Yet they are transmitting data to Earth, illuminating the darkness at the edge of our solar system and hopefully beyond.

Voyager 1 managed to fly alongside Jupiter and Saturn, and Voyager 2 did the same, then passed next to Uranus and Neptune.

The vast distances traveled by Voyager 1 and 2 are staggering: 13 billion miles and 11 billion miles respectively. Since information travels at lightning speed, it takes about 17 hours or more to transmit data from the spacecraft to Earth. In comparison, the light emitted by the sun takes about eight minutes to reach Earth.

Voyager probes are powered using the heat from the decomposition of the radioactive material, which is contained in a device called a radioisotope heat generator. The power output decreases by around four watts per year, which means they will likely run out of power within this decade.