How to download GTA 5 roleplay PC free? Download / Install / Connect Five M with GTA 5 to play Roleplay/RP on your PC for free.

GTA 5 is one of the most popular games from Rockstar. GTA 5 is an open-world game that you can play both offline and online. GTA 5 offline mode is based on the story mode where you can complete several missions with 3 characters: Michael, Trevor, and Franklin. You can play GTA online with your friends, where you can complete several missions together by having fun in public and private lobbys. Let's look at how to get GTA 5 Roleplay PC for free in this article. 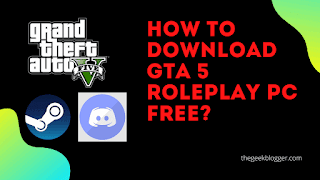 What is GTA 5 Roleplay?

GTA V roleplay is a multiplayer mod for the PC version of Grand Theft Auto V. GTA 5 Roleplay got very popular in India, all because of streamers and content creators. It is very much fun watching characters role playing having fun. In GTA 5 Roleplay you can do RP of Police, Criminals, Gangsters, Doctors, etc. You can also become the owner of a business or become an employee. You can also do lots of things like hanging out with friends, love RP and all, it depends on how you make your character to act or Roleplay.

GTA 5 Roleplay has certain rules which are being provided by the Server owners when you join any server for the first time. Some common rules are like you have to communicate in the game with other players while doing any job or hanging out etc. You can't do Meta Gaming or Power Gaming. You have to explore and meet everyone according to your roleplay and make friends.

Like all these, there are many other server rules which you have to follow while playing GTA 5 Roleplay, if you break any rules then you might get banned from the server.

It is interesting right! You will enjoy it a lot. GTA 5 Roleplay is a kind of Real-world implementation.

How to download and install GTA 5 Roleplay on PC for free?

To play GTA 5 Roleplay you must own or buy GTA 5 game from steam before proceeding to the below steps. The epic game version is not yet supported by FiveM.

Note: FiveM is officially approved by Rockstar Games GTA 5 to mod the game for Roleplay. So, don't worry about it. GTA Online and GTA 5 Roleplay is totally different.

Also Read: How to download and play Grand Role Play?

Here are the steps to download and play GTA 5 Roleplay:

> Open Steam and let it remain open in the background. 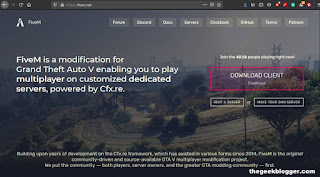 > After FiveM is downloaded open it and let it download some files and updates on your PC. It will automatically locate the game content and update the game cache.

Note: To locate your GTA 5 Folder in steam, Go to Library > Games > Right Click on GTA 5 > Properties > Local Files > Browse Local Files. You can view and select the path up there for reference.

> After FiveM launches you will have to go to Servers Tab there you will find lots of servers where you can connect and play.

> Also join the discord server by copying the link from there.

> You can also connect to servers by copying the Server Address of any Servers by pressing F8 while FiveM is running. ( For Laptop "Fn+F8" ).

> After pressing Enter, your game will connect to the particular server and you can start playing by choosing your character which you make.

> When you want to get out of the server type "Quit" on the terminal using which you connected to the server.
List of Softwares used to play GTA 5 Roleplay:
1. FiveM Client.
2. Discord.
3. Steam.

Also Read: How to increase fps in GTA 5 on low-end PC or laptop?

FiveM is a modification framework for GTA 5, allowing you to play multiplayer on customized dedicated servers.

3. How to join whitelisted servers in GTA 5 RP?

To join whitelisted servers you have to join their discord servers and fill a form, after filling once you get approved you may be asked for an interview session then only you will be able to play.

Yes, GTA Roleplay is free as long as you own the GTA V PC version, for the most part.

* If you face any issues while downloading GTA 5 roleplay on your PC then feel free to comment down below, I will solve your problem.