Home
Gaming
How to

How to download Raji: An Ancient Epic game for PC?

In this article let's know about India’s first PC and console game Raji: An Ancient Epic is now out for PC, PS4, Xbox One. The game was previously released on Nintendo Switch back on August 18. It's an awesome made in India game.

Joining the Nintendo Switch version launched back in August, you can now get the game on PC via Steam and the Epic Games Store, Xbox One, Playstation 4https://t.co/FhvAJuZ5Lx#rajithegame #ps4 #xboxone #steam #epicgames pic.twitter.com/23C4krPh8j 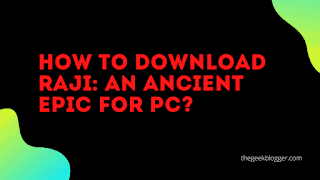 What is Raji: An Ancient Epic game on?

It is an action-adventure game set in ancient India. A young girl named Raji has been chosen by the gods to stand against the demonic invasion of the human realm. Her destiny? To rescue her younger brother and face the demon lord Mahabalasura.

The story of Raji: An Ancient Epic

This game begins with the start of a new war between the demons and the gods. Seeking to avenge their defeat in the last great war from a thousand years ago, the demons have challenged the gods who humiliated them and have invaded the human realm, threatening them with extinction.

Thinking that their enemies had been utterly defeated in the last great war, a thousand years ago, the humans had fallen into a false sense of security, forgetting the ways of alchemy, while enjoying the peace. Unable to defend themselves, cities and fortresses fell, leaving the humans at the mercy of the demons.

Amidst the chaos, as cities and fortresses fell, and as young children were abducted from their homes, a young girl named Raji is chosen by the gods to be the sole defender of the human race.