Is Mars habitable? Images of Mars taken by Perseverance rover 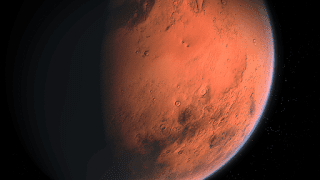 Also Read: Mars colonization can be challenging with real problems.

Mars has evidence of being warmer in the past and of having stable liquid surface water for potentially hundreds of thousands of years.
So it's possible that in Mars's past there was a time where life could have evolved in that particular environment.

So, "Is Mars habitable?" and as of yet, the answer is still definitely maybe.

Perseverance rover was launched on July 30, 2020, & Landed on Mars on Feb. 18, 2021. Tasks that are assigned to rover: Photography, collecting rocks, off-roading.

The moment that my team dreamed of for years, now a reality. Dare mighty things. #CountdownToMars pic.twitter.com/8SgV53S9KG

An open horizon, with so much to explore. Can’t wait to get going. #CountdownToMars pic.twitter.com/hAaxeVGs04

I love rocks. Look at these right next to my wheel. Are they volcanic or sedimentary? What story do they tell? Can’t wait to find out.#CountdownToMarshttps://t.co/7w3rbvbyoL pic.twitter.com/H3q1M0YJAd

Ingenuity, the Mars Helicopter I carry, is working as expected. I’m currently charging it, but once I set it down, it’ll rely solely on its solar panels. If it survives the brutally cold Martian nights, the team will attempt flight. https://t.co/8pksN06ZwP #CountdownToMars pic.twitter.com/80kEoww0QU