Why Broadband is Unlimited and Cheap?

Broadband Internet service is truly the most used form of the Internet with high speeds. Let's know why broadband is unlimited and inexpensive. 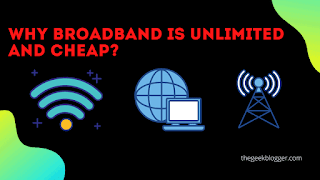 Broadband Internet service truly is the most used form of the Internet with high speeds; it is offered in four different forms, Digital Subscriber Line (DSL), fiber-optic, cable, and satellite.

What is unlimited internet?

It is said as unlimited internet but actually, it's not unlimited, We are provided to use data as much as we can but there is a catch as some providers after consuming a certain amount of data they reduce the speed based on fair usage policy so that other users get an equal amount of speed. The same happens on mobile internet we get unlimited internet but up to 1 GB / 2 GB after consuming its speed is reduced to something around 64 kbps.

As resources are limited with service providers & users are increasing day by day and the broadband company has to provide an equal amount of service to everyone. Here data is not the problem but speed is if 1 user downloads too much the other users might face issues with the speed that's why fair usage policy applies here.

What is truly unlimited internet?

Here speed will be constant you can download or stream as much as you can but the cost of the plans is high. What broadband companies do here is increase their resources so that they can provide better services as they are charging high for unlimited services without a catch.

Why broadband is cheap?

Broadband is cheap because coverage is less and connections are wired where fiber optics cables are used mostly. Whatever maintenance and equipment are required to deploy a broadband network is very cheap compared to mobile networks. We know very well that it is very costly to deploy or maintain a mobile network as it is wireless and coverage is broader.

We also know most of the time we face problems in our broadband connection as it's wired so it can break anytime anywhere but repair cost is cheap if same comes to the mobile network or mobile tower then repair cost is very high.

So, this is all about why broadband connections are unlimited and cheap.