This article will let us know about alien life which scientists believe might exist somewhere in space. 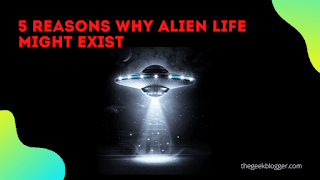 What is alien life?

Alien life is an Extraterrestrial life kind of hypothetical life that may occur outside Earth & doesn't belong from the earth.

In order to detect if planets are harboring life, however, scientists must first determine what features indicate that life is (or once was) present. Over the last decade, astronomers have expended great effort trying to find what traces of simple forms of life—known as “bio signatures”—might exist elsewhere in the universe.

So let's look into five reasons why alien life might exist.

According to the Drake equation, there could be 3500 to 4500 active aliens civilization in our galaxy.

Astronomers have detected above 4000 habitable planets within our galaxy alone and there are more than two trillion other galaxies in our universe.

According to this theory, alien civilizations are incredibly advanced and spending their life in hibernation waiting for the universe to cool down.

> Trapped in the deep ocean

Alien life forms might be trapped in deep oceans, where they, re trying to overcome a big hurdle to reach the surface.

The only example of life is  we have is the life on earth and there can potentially be other life forms beyond our imaginations.

A civilization, by nature, will need to find a way to produce energy, and, Frank says, “there are only so many forms of energy in the universe. Aliens are not magic.” Scientists have discovered more than 4,000 planets outside our solar system. Trying to answer the questions, do aliens exist and are aliens real, astrophysicists including the University of Rochester's Adam Frank are seeking the physical and chemical signatures that would indicate advanced technology.