How does your mobile phone work?

This article will explain everything about, how does your mobile phone work?

A mobile phone is a part of our daily lives. In this article, let's learn the technology behind mobile communications & how does it work. 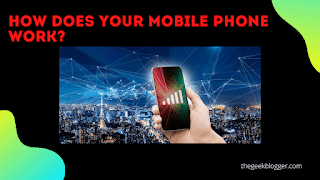 How our voice is transmitted?

Electromagnetic waves transmit the 0's and 1's by altering the wave characteristics, such as the amplitude, frequency, phase, or combinations of these. For example, in the case of frequency, 0 and 1 are transmitted by using low and high frequencies.

How electromagnetic waves are transmitted from caller to receiver?

To establish a call with whatever electromagnetic waves our phone generates needs to be transmitted to receiver. However, electromagnetic waves are incapable of traveling long distances. They lose their strength due to the presence of physical objects, electrical equipment, and some environmental factors. If there were no such issues, even then, electromagnetic waves would not carry on forever, due to the Earth's curved structure. To overcome these issues, cell towers were introduced also called BTS (Base transceiver station), using the concept of cellular technology. In cellular technology, a geographic area is divided into hexagonal cells with each cell having its tower and frequency slot.

These cell towers are connected through wires, or more specifically with optical fiber cables. These optical fiber cables are laid under the ground or under the ocean, to provide national or international connectivity. The electromagnetic waves produced by our phone are picked up by the tower in our phone and converted into high-frequency light pulses. These light pulses are carried to the base transceiver box, located at the base of the tower for further signal processing, After processing, our voice signal is routed towards the destination tower. Upon receiving the pulses, the destination tower radiates it outwards in the form of electromagnetic waves, and receiver phone then receives the signal. This signal undergoes a reverse process, and receiver hears our voice. So, it's true that mobile communications are not entirely wireless, they do use a wired medium too. This is how mobile communications are carried out.

How does a tower know in which cell tower area receiver is located to whoever you're calling?

Let's know how cell towers manage to send signals to exact destination. Well, for this process, the cell tower gets help from something called a mobile switching center. The MSC is the central point of a group of cell towers. Before moving further, let's explain more information about the MSC. When you purchase a SIM card, all the subscription information is registered in a specified MSC. This MSC will be your home MSC. The home MSC stores information such as service plans, your current location, and your activity status. If you move outside the range of your home MSC, the new MSC, which serves you instead, is known as a foreign MSC. As you enter a foreign MSC region, it communicates with your home MSC. In short, your home MSC always knows which MSC area you are in. To understand in which cell location the subscriber is within the MSE area, the MSC uses a few techniques. One way is to update the subscriber location after a certain period. When the phone crosses a predefined number of towers, the location update is again done. The last one of these is when the phone is turned on.

Let's try to understand all of these procedures with an example. Suppose, Mr X wants to call Mr Y. When Mr X dials Mr Y's number, the call request arrives at Mr X's home MSC. Upon receiving Mr X's number, the request will be forwarded to Mr X's home MSC. Now, Mr X's MSC checks for his current MSC. If Mr X is in his home MSC, the call requests will be immediately sent to his current cell location, and it checks whether Mr X is engaged on another call, or if his mobile is switched off. If everything is positive, Mr X's phone rings and the call will be connected. However, if Mr X is not in his home MSC, Mr X's home MSC simply forwards the call request to the foreign MSC. The foreign MSC will follow the previously explained procedure to locate Mr X's phone, and will then establish the call.

Why the frequency spectrum is quite important in mobile phone communications?

To transfer 0's and 1's in digital communication, each subscriber is allocated a frequency range. However, the frequency spectrum available for cellular communications is quite limited, and there are billions of subscribers. This issue is solved with the help of two technologies, one frequency slot distribution, and two, multiple access techniques. In the first technique, different frequency slots are carefully allocated to different cell towers. In the multiple access technique, this frequency slot is efficiently distributed amongst all the active users in the cell area.

Why are there different generations of mobile phone technologies?

1G originally allowed users, for the first time, to carry a phone without a cable attached to it. But 1G suffered from two major problems. The first problem was that the wireless transmission was in an analog format. Analog signals are easily altered by external sources. So, it provided poor voice quality and poor security. The second problem was that it used the frequency division multiple access techniques, which inefficiently used the available spectrum. These factors paved the way for the second generation of mobile communications, 2G used digital multiple access technologies, namely TDMA, or CDMA technology. The second generation also introduced a revolutionary data service, SMS, and internet browsing. 3G technology was focused on giving a higher data transfer speed. It used WCD multiple access techniques, along with an increase in bandwidth. To achieve this, the 3G speed of two Mbps allowed the transfer of data for uses such as GPS, videos, voice calls, et cetera. 3G was a huge step in the transformation of the basic phone to a smartphone. Next came 4G, which achieved speeds of 20 to 100 Mbps. This was suitable for high-resolution movies and television. This higher speed was made possible due to the OFD multiple access technologies, and MIMO technology. MIMO uses multiple transmitter-receiver antennas inside both the mobile phone and the towers.

The next generation of mobile communication, 5G, to be rolled out soon, will use enhanced MIMO technology and millimeter waves. It will provide seamless connectivity to support the internet of things, such as driver less cars and smart homes. Also there are rumors researchers are working on 6G technology.