What is Web 3.0? How it is different from previous Web generations?

In this article, we will know an overview of what is Web 3.0 in comparison with previous Web generations i.e Web 2.0 & Web 1.0. 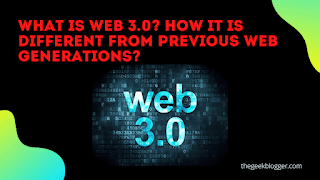 Understanding What is Web 3.0

> Web 3.0 describes the next big transformational change to what we call the internet & World Wide Web.
> Web 3.0 is the third generation of the internet. Its goal is to create a more open, connected, and intelligent version of the Internet.
> Web 3.0 uses new technologies such as Blockchain, Virtual Reality, Augmented Reality, and Artificial Intelligence to create decentralized and highly engaging internet experiences.

Let's start with 1.0 as an initial overview of what the internet was between the years 1991 and 2004 the internet was mostly a bunch of static pages meaning that whenever you loaded them they just showed some stuff and that was it some called it read-only. There wasn't any logging in or interacting with posts or viewing analytics most of the early internet wasn't even profitable by ads, it was mostly just like one big Wikipedia all hyperlinked together.

Now, of course, with time we slowly made improvements and things like flash and javascript added many new different features however during this time the users of the internet were consumers who went to the internet to consume information.

Let's know about web 2.0 from around 2004 until now during this time the web evolved a lot but one of the biggest changes was the interactivity of the internet this meant that not only did we get information from pages but the web pages started getting information from us as we viewed Facebook and youtube and performed google searches, these centralized companies started collecting data about us so that they could serve us better content which in turn would make us stay on their websites longer this meant more money for them.

But eventually, they realized they could package up all the data they had collected on us and sell it to advertisers web 2.0 is the age of targeted advertising and the lack of privacy for its users now to be fair we willingly gave up this privacy too for cool apps like Facebook and Twitter in web 2.0. I and you could both view facebook.com and see two very different news feeds because the page depended on who was viewing it which is important.

Note for a difference in web 3 that the content on your feed is the company sorting data by information that you know that you gave them likes and how much you watched a video.  But if you look at the ads that they show you that is them sorting data by the information you didn't know you give them. When you went to eat something special last night they knew that when you dropped your kids off at school every day at 8 a.m except for Fridays, they knew about it. I saw on the internet which said machine learning started showing a guy some parenting ads because they knew he was going to be a father before he did if it wasn't machine learning it was probably because his girlfriend used their public IP address to do a search on her symptoms and the machine learning algorithm probably already knew when she was ovulating.

Anyways whatever the case is how they predict this one centralized company controlling all of this data whether we want to or not is scary.

Web 3.0 is the next evolution of the internet. Probably utilizing blockchain technology and the tools of decentralization in web 2.0 you were the product as you were browsing social networks but in web 3.0 some believe that you will be the owner of your content the stuff that you post online now this is kind of true so if you want a post to stay up it'll stay up but if you want to take it down they say in web 3.0 you can control that because as we all know usually when something is on the internet it's always on the internet.

Here's one example that's already real odyssey is a blockchain alternative to youtube where videos can be posted and creators can earn library tokens which are a reward for enticing viewers to watch their videos the thing about odyssey though is that they can't stop a video from being posted if someone uploads it and If someone else in the network wants to share it they technically download that video and then let others watch that video and download it as well kind of like a big torrent network if you know what that is to expand on this your post couldn't be taken down because your post wouldn't just be on one of the Facebook servers it would theoretically be on thousands of computers around the world ensuring that the blockchain social network you're on is not attacked or censored.

Theoretically, this means there would be a lot of illegal and hateful things posted but it would be in the name of freedom of the users of the networks could probably decide on a system to reduce that harmful content.  An web 3.0 experts say that we will reach the point of the internet where every company will run a decentralized group called a DAO which stands for decentralized autonomous organization.

However, the company changes are not limited by a government or some family tradition in web 3.0 there will be no censorship of social networks like Facebook or Twitter one controlling authority cannot shut them down. Lastly one of the biggest things in web 3.0 is that your digital identity is not 100 connected to your real-world identity this means I can view pages download things make purchases and any other activity on the internet without being traced to the real me now there are many ways we can anonymize ourselves online.

I also want to discuss a bit about the web 3.0 foundation now there is a company called the web3 foundation that supports projects for increasing decentralization on the internet there three big projects are the blockchain, polka dots test chain, and the web 3 summit which isn't a good overview of what web 3.0 is but they also offer some grants a lot of which have to do with supporting and using the polka dot blockchain so it seems to me the Polkadot team used the web 3 name as a brand to push their agenda. What I mean by this is this would be like the company facebook buying a foundation for web 2.0 and saying they are the ones who initiated it Facebook is a company while web 2.0 is an idea the same way that polka dot is a blockchain and web 3.0 is an idea one doesn't own the other.

Wrapping it up these may be long-term ideas of those who think about web 3.0, what web 3.0 means for us is that in the next decade, you might be able to buy amazon gift cards using MetaMask and pay with Ethereum or that you could anonymously leave a like on one of your friend's posts using one of your hidden wallets it's not going to be a bunch of life-changing stuff all at once it'll likely be a series of ideas that grow together until centralized companies like Facebook and google are disassembled by the legislature while decentralized unregulated grow to replace them.