The GGGQEP Storage Device: The Future of Data Storage

This article is all about the Future of Data Storage technology concept GGGQEP ( Gadolinium Gallium Garnet Quantum Electronic Processor ).

In this article, let us know about the future of data storage. Data storage can be a big problem in the future.

What is the full form of GGGQEP? 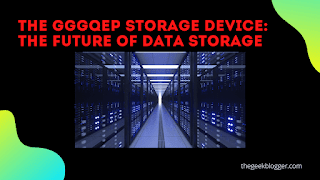 What is the future of data storage?

As technology improves, we are all generating a lot of data. A time will come when all the hard disks, SSD's, pen drives, etc. storage devices in the world, including all the servers, will be full. There will be no raw materials left for making the storage devices; it will all be finished. So to avoid this problem, we need to make some storage devices that are much more advanced than the current technology that can store a lot of data.

As technology has advanced, more data has been generated. And the fact is that in the previous year, we generated 90% of the data on the entire internet. So we need new technology to store a huge amount of data.

What is the GGGQEP Storage Device?

GGGQEP is an artificial crystal that looks a bit like a diamond. Some scientists think that this type of storage device is used now. However, no evidence was found. A 5 cm GGGQEP storage device can store the entire internet 11 times. And the size of the whole internet is 1 million exabytes. One exabyte is equivalent to 1,000 petabytes, or one billion gigabytes (GB). So think about how much data a 5 cm GGGQEP Storage Device can store. GGGQEP is the future of data storage.

Data can be written to the GGGQEP Storage Device only once. Once written, it can not be erased. However, reading can be done an unlimited number of times.

If the GGGQEP Storage Device is true, and once this device merges with the quantum computer, then imagine a computer that will be created with this advance technologies that no one can even think of.

As demand for data and storage of it is increasing and getting up to a certain threshold, the future of data storage is soon going to be implemented as technology is growing rapidly. If you have any doubts, do let me know in the comments.