How does the internet work in space?

Let's know how the internet works on the International Space Station or in space. Do astronauts have internet in space, and if so, how fast is it?

In space, internet access works in a similar way to how it works on Earth. However, there are some differences due to the unique challenges of providing internet access in a space environment. 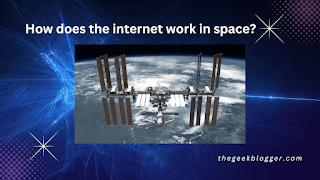 Is there an internet connection at the International Space Station (ISS)?

In space, internet access is often slower and less reliable than it is on Earth due to the distance the data must travel and the potential for interference or other issues. However, advances in satellite technology are constantly being made, and internet access in space is becoming more reliable and widely available.

Previously, astronauts used to send personal emails or messages directly via NASA from ISS. After 2010, NASA provided internet facilities on the space station that are available on computer nodes and are used only for work communications, research purposes, and live stream uplinks with NASA. In their spare time, astronauts use Twitter or send emails, but because internet is limited, they use it wisely with restrictions and limited bandwidth and speeds. There is no wifi like we have it on Earth; astronauts use computers on board to access the internet.The ping rate on the ISS is also very high.

But now, following its most recent upgrade, ISS now has better internet than the majority of us. It will be helpful for future missions to the Moon, to Mars, and other deep-space destinations. It's especially important.