BharOS: An Operating System Made in India 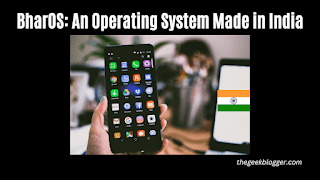 BharOS is an Android open-source project (AOSP)-based operating system funded by the Government of India and developed by JandK Operations Private Limited (JandKops), which has been incubated at IIT Madras. This OS is designed to deal with confidential information that requires added security. It also focuses on providing users with more freedom, control, and flexibility to choose and use only the apps that fit their needs.

How is BharOS different from Android?

The only difference between Android and BharOS is that it doesn't include any Google services, allowing users to download any application of their choice. There are no default apps. Users can download any apps of their choice that are safe, and users will have more control over the permissions or data that apps will take. BharOS offers "Native Over The Air" (NOTA) updates that help keep the device safe. He also said that trusted apps from specific Private App Store Services (PASS) may be downloaded on devices running BharOS in the absence of any Google Play services. PASS will make sure apps are safe and meet certain security and privacy standards before installing them. BharOS uses default browsing and messaging apps that are third-party services like DuckDuckGo and Signal.

When will BharOS be released and preinstalled on smartphones?

It is expected that BharOS will partner with Android original equipment manufacturers (OEMs) to launch phones with the operating system in the near future for the public.

The OS's creators claim that it is more secure than both Android and iOS, and that it can extend the battery life of each device. Will you switch to BharOS? Let me know in the comments.

Yes, It's a free and open-source operating system (OS).