In this article, let's know the differences between a quantum computer, a normal computer, and a supercomputer. 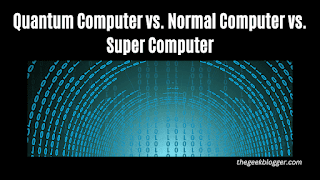 A normal computer, also known as a classical computer, uses classical bits to represent and process information. These bits can exist in one of two states, either a 0 or a 1.

A supercomputer is a type of classical computer that is designed to perform complex calculations and simulations. They typically have many processors and a large amount of memory, which allows them to perform calculations faster than a normal computer. Supercomputers are used for tasks such as weather forecasting, scientific research, and developing new technologies.

A quantum computer, on the other hand, uses quantum bits or qubits to represent and process information. Unlike classical bits, qubits can exist in multiple states at the same time, a property known as superposition. Additionally, qubits can also become entangled, meaning that the state of one qubit can become correlated with the state of another qubit, even if they are separated by large distances.

However, the development of practical quantum computers is still in its early stages and there are many open research questions and challenges that need to be addressed. For example, one of the main challenges is that qubits are highly sensitive to their environment and are easily disturbed by external noise, which can cause errors in the computation. Additionally, it is also difficult to control and measure the state of qubits, which makes it challenging to build large-scale quantum computers.

In summary, normal computers use classical bits to represent and process information, supercomputers are designed to perform complex calculations and simulations and quantum computers use quantum bits, or qubits, to represent and process information, which allows them to perform certain types of calculations much faster than classical computers. However, quantum computers aren’t simply computers that are much quicker than regular "classical" computers. In other words, quantum computers won't replace classical computers because they are only better at a narrow range of very specialized jobs. This generally involves solving very specialized mathematical problems, which don’t usually come up as day-to-day business computing requirements. These problems include simulating quantum (sub-atomic) systems and solving optimization problems (finding the best route from A to B, for example, when there are a lot of variables that can change). One area of day-to-day computing where quantum computing might take the place of classical computing is encryption, for example, securing communications so they can’t be hacked. Researchers are already working on developing quantum-safe cryptography because there are fears that some of the most advanced cryptographic protections used for security at the government level could be trivially defeated by quantum computers in the future.